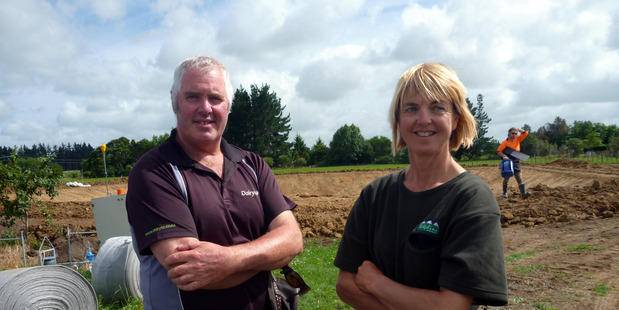 The effluent pond installed on a Marton dairy unit last week has been a high priority for the pair who bought the farm three and a half years ago.

Headed up "Crap Day Out", Logan Bowler and Kathy Craw held an open day on January 13, to allow other farmers to watch the installation. Education is important to both of them.

Mr Bowler is from Marton and works full-time as DairyNZ's North Island environmental extension specialist. Ms Craw was brought up on a dairy farm at Taikorea in the Manawatu. She has sharemilked and managed dairy farms, as well as worked as a Horizons Regional Council rural advisor for two and a half years.

The new pond will hold 2000 cubic metres/2000 litres of effluent and prevent them irrigating effluent onto wet soils.

"We don't want to irrigate wet soils. When it's really wet around here the last thing you want to do is to put more liquid on," Ms Craw said.

When the two got together they wanted to buy land. They scraped together all their savings to buy the 96ha dairy farm on the outskirts of Marton.

At the time it was storing dairy shed effluent in a small sump, and irrigating it to land daily. They immediately spent about $85,000 on a larger sump - but it still meant daily irrigation.

With the new pond they can store effluent until the soil is dry enough to absorb it.

"That's going to be one of the huge things for Kath, not chasing an irrigator when calving. Spring is the worst time. It's wet, the cows are making more effluent and being milked. Now we will just open a valve and fill the pond. It's so much easier," Mr Bowler said.

"For this little farm the effluent system is costing close to $200,000. It's a lot of money but It gives us a license to carry on."

Dairy farming is classed as intensive land use and the farm is in one of Horizons' priority catchments. It drains to the Tutaenui Stream, which drains to the Rangitikei River. The two need consent to operate.

Long-term, their farm is not allowed to leach more than 21kg of nitrogen per hectare per year. At the moment it's only leaking about 18kg/ha a year, because the fine particles in their soil reduce leaching.

"If you are lucky enough to be on poor soils, which is where we are, they're almost bulletproof."

With the new effluent system their leaching could reduce to 16 or 17kg/ha/year.

Because they are below their leaching limit their farm is classed as compliant, and they don't have to do any mitigation.

Ms Craw and Mr Bowler's herd of 220 eat mainly ryegrass and clover pasture, plus some hay and balage they make themselves and some silage, hay and palm kernel expeller that they buy.

They could increase stock numbers and buy in more food and stay within their nitrogen leaching limit. But they don't want to, because the extra stock would damage their soils by compaction.

The extra feed would also be expensive, which could make any increase in herd size unprofitable.

They use an "average" amount of fertiliser, as well as irrigating with liquid effluent. They also spread solid waste once a year, in early autumn. Some of it is mixed with wood chip from their wintering house and some is from their feedpad and stored in a bunker.

The feedpad is concrete, and cows feed on it for parts of each day in the wettest two months of the year. They sleep in the wintering house for about a month of cold nights.

"It's a dry place to sit. It's not perfect but it's better than being in a wet, muddy paddock," Ms Craw said.

With a $4/kg milk solids payout the farm could just break even and pay interest on debt. With a $6 payout predicted this year the two plan to put some money into improving their cattle races.

It was too windy on Friday for contractors to line the new pond with the black high density polyethylene plastic they had on hand. About 20 people, including farmers, milk companies and Horizons Regional Council staff came to the open day.

The lining was finally laid down on Saturday morning.

Under it are metal drains to capture any effluent that leaks through. The fluid then drains into a sump with a manhole that's lifted to check for leakage.

The lining has a manufacturer's guarantee for 20 years. But I.S Dam Lining technical sales engineer Brook Newson said the plastic had been known to last for 50.

The contractors will also install two ladders into the pond, so that anyone who falls in can get out.

Blackley Construction contract manager James Christensen once went back to see a pond they had made. It was full, and they found a woman swimming around in it.

She was trying to catch her dog, which had fallen in. She used a ladder to get out.